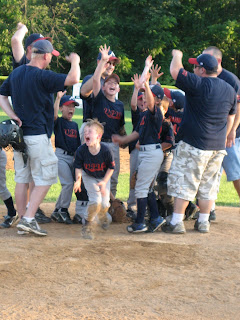 The Braves won the Elizabethtown Boys Club Minor League championship 4-3 in a come-from-behind win tonight at Wenger Field. They were down 3-1 in the bottom of the third inning with two outs when several players came up with clutch hits to bring in three runs and pull ahead.

Full disclosure: My son played for the Braves. And admittedly, I probably wouldn't be writing about this if he would not have been in the championship because I wouldn't have a vested interest. That said, the title of my blog is Chronicling Elizabethtown, and that's what I'm doing.

The season was a great one for the Braves. They only lost one game and tied one. But beyond records, all of us parents in the stands saw marked improvement with every player. My son was missing balls on the tee at the beginning of the season and in the last games of the regular season was hitting off the pitcher -- and even hit a double and a single in one game with multiple RBI. Some of the players who came up with clutch hits tonight were younger players and not at the top of the batting order.

And that's what it's all about -- watching youngsters improve their skills and learn sportsmanship. I love to see each of them play so earnestly as they learn the fundamentals. And it's great to see pitchers walk to first base to shake the hand of a batter who was hit by a pitch.

Credit goes to a great coaching staff led by Tim Gartley, whose calm demeanor and patience with the kids paid off. All the coaches took time to work with the kids and spend time with them one on one to practice if necessary.

I do want to make one comment: During the ceremony where players were presented with their medals, parents of Braves players, coaches and the players themselves cheered for the losing team as the coach hung medals around each player's neck. As one of the Braves parents said, "We wooed for all of them." And they did.

Given this was the championship, and given that these are 7- to 9-year-old kids who need to learn sportsmanship, it meant as much to have my son learning from this example as it was to have a coach spend extra time with him to improve his fundamentals.

Most of all, I congratulate the players for their hard work and dedication to learning America's pastime and continuing it for another generation.
Posted by Jeff McCloud at 11:02 PM