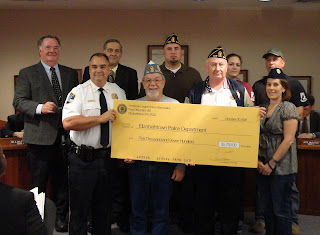 For the second time in a little over a year, the American Legion Post No. 329 in Elizabethtown has made a significant contribution to the Elizabethtown Police Department.

Last month, the post donated $5,700 for the department to purchase a thermal imaging device from FLIR (Forward Looking Infra-Red). This hand-held device allows users to see heat or temperature signatures against a contrasting background. It is the same technology used in helicopters and aircrafts for spotting people and vehicles from the air during hours of darkness.

The police department's primary use of the device will be during hours of darkness and will be extremely helpful in searching for lost people such as children or Alzheimer patients who may wonder away from their care provider. It can also be used to assist in the search for discarded property from a crime scene, such as items from a robbery or burglary. The device does NOT have the capability of seeing heat signatures through walls or other solid objects. The video below is from FLIR's website.

In August 2010, the American Legion donated $5,000 for the police department to purchase a speed trailer. The Legion's latest donation came on the heels of the news that the Elizabethtown Rotary Club had donated funds to set up a program for Elizabethtown High Schools students to anonymously text tips to police.

It's fantastic to see community organizations stepping forward and making significant contributions that enhance public safety in Elizabethtown. These are items that are on the police department's wish list -- but are not priority items when it comes to budgeting. For the American Legion and the Rotary Club to raise the funds is a testament to their concern for the borough -- and I think I can say on behalf of Borough Council as a whole, "Thank you!"