Why is the Chestnut Street bridge still closed? 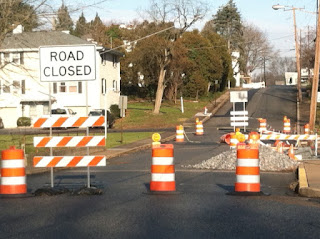 This has become a familiar sight for motorists and nearby residents: The bridge on South Chestnut Street has been closed to traffic since the flooding in September.

So why hasn't it been repaired? And what is taking so long? Chalk it up to the state Department of Environmental Protection.

The borough needs a permit to do the work because the bridge crosses a stream. The borough administration took care of the design and applied to DEP. In October, Borough Council voted to approve a contractor to do the work on the bridge for $70,728 (along with the South Poplar and West Bainbridge street bridges -- total work for all three, a little more than $110,000).

When the borough's administration reported this to members of Borough Council after a meeting last week, my colleagues were incredulous. One of the reasons municipalities and states declare emergencies and disasters is to expedite repairs.

But that doesn't seem to have filtered down to the bureaucrats at DEP.

Yes, we recognize that the flooding was epic not just here in Elizabethtown. Our neighbors in Manheim, Hershey, Hummelstown, Middletown and elsewhere had significant and serious problems. But to take more than 3 months to tell us the design is inadequate is irresponsible. Our engineers could have been working on this redesign and perhaps even submitted it for approval.

This means taking even more time to go back to the drawing board and design according to DEP's comments. Let's fix the target and keep it there and keep in mind that your decisions continue to impact and inconvenience residents in our fair town.