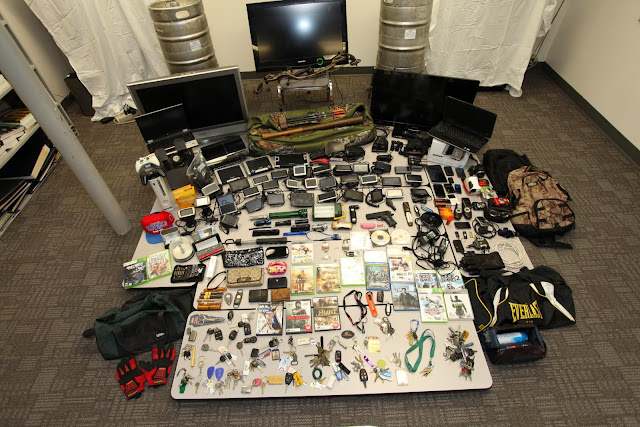 Elizabethtown police arrested three local residents on Dec. 2 after stopping a vehicle in the first block of West Bainbridge Street. The vehicle was stopped based on a description broadcast by Susquehanna Regional Police Department for a suspicious vehicle and its occupants who were trying to enter vehicles.

Police arrested Clifford Hostetter, 26; Jeremy Wise, 20; and Adam Zink, 19, all of Elizabethtown, after obtaining information during the traffic stop and a subsequent investigation that is ongoing. They were charged with multiple counts of burglary and theft that ocurred in Elizabethtown. They were arraigned in front of District Justice Jayne Duncan and in lieu of $25,000 cash bail each were committed to Lancaster County Prison.

Police said the investigation also revealed a widespread pattern of thefts from vehicles by Hostetter, Wise and Zink since sometime in August.This resulted in the recovery of over 300 hundred stolen items from the homes of the defendants, with an estimated value of over $10,000. Elizabethtown police have contacted police departments elsewhere in Lancaster County, as well as Dauphin and Lebanon counties, to determine additional victims and to attempt to return the property.

Additional charges are expected. The investigation is ongoing. Officer Greg Sheffer is the point of contact for inquiries regarding this investigation, he can be reached at 367-6540 Ext. 246.

Anyone who had items stolen from their vehicle in the Borough of Elizabethtown is asked to contact Officer Sheffer or email the Elizabethtown Police Department at elizabethtownadmin(at)police(dot)co(dot)lancaster(dot)pa(dot)us.

Victims who have had items stolen from vehicles who reside outside of Elizabethtown should contact their local police department to follow up on this investigation.

The investigation revealed that nearly all of the thefts from vehicles were done from unlocked vehicles. Borough Police Chief strongly advised people not to keep valuables in sight in their vehicles and to lock them.

Breaking into vehicles "is a crime of opportunity" and those committing the crime are "looking for the easiest target."
Posted by Jeff McCloud at 5:26 PM