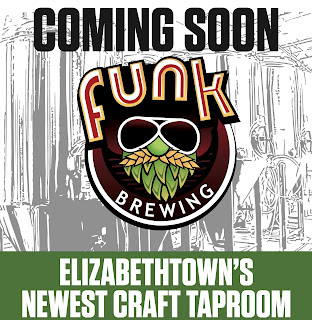 If all goes well, Elizabethtown's second craft beer taproom could be open -- and smack in the middle of downtown -- by the beginning of November.

That's the word from Jon "Norm" Norman, an Elizabethtown resident and one of the two partners in the Lehigh Valley-based Funk Brewing Co.

If you've driven by the former Elizabethtown Hotel, you've seen the signs and the renovations that are happening. To say this is good news for the downtown business district is a huge understatement.

They are making renovations to the first floor of a building that has been vacant for years, one that we on Borough Council have discussed many times. And in talking to Norman, one can't avoid is infectious enthusiasm for downtown Elizabethtown and the people here that he sees coming out for events such as Second Fridays.

"There's a really good crowd here in E-town," he said over lunch this week at Pita Pit.

Norman and his partner, Kyle Funk, are brothers-in-law and brewed their first batch of Funk Beer for commercial production in January 2014 in Emmaus. They both attended an immersion course offered by Colorado Boy Brewing in Ridgway, Colo., to learn "to do what they do."

Since opening their taproom in the Lehigh Valley, Funk Brewing has grown to brewing 150 to 200 kegs per month that are distributed throughout the region. You can fnd Funk brews on tap in Lancaster and Harrisburg, and Norman said much of their beer is distributed in Philadelphia.

So why open here in Elizabethtown? Norman said it's for selfish reasons, in part. He has a full-time day job to support his family, in addition to running the business side of Funk. As a resident of the borough, he sees a huge opportunity because places like Lucky Ducks Bar and Grille and T.J. Rockwell's often get crowded. It's not unusal to wait for an hour and a half for a table at Rockwell's.

"There's definitely room for someone else," Norman said.

He also said that locals enjoy craft beer. The Black Gryphon and Lucky Ducks have great selections of craft beers, not to mention that Moo Duck Brewery opened in March last year, and Cox Brewing Co. is supplying beer to area taverns.

In my estimation, the economic impact on downtown Elizabethtown can be significant. Craft beer lovers frequently make a trip to visit different breweries and brewpubs. When they come, they spend money. The Craft Beer Association says the economic impact of craft beer brewing in Pennsylvania is nearly $4.5 million, which is second in the nation. The state ranks first in craft beer production with more than 4 million barrels annually.

When Funk opens here, expect 8 beers on tap with growlers available in an English-style taproom. Norman said there will also be a full menu with all locally sourced ingredients. Patrons will order food at the bar, and waitstaff will deliver it to their tables. Beer, of course, will be front and center, with special tastings and experimental batches,

"We want to have great beers and make it a great experience for people coming in," Norman said.

If you want a preview, Norman said Funk Brewing will be featured at a Meet the Brewer event at the Black Gryphon on Oct. 22.
Posted by Jeff McCloud at 10:05 AM