Work at the Elizabethtown Train Station has started, including a fair amount of work inside the old building itself. Anyone who has visited the train station recently can tell work is happening. A chain link fence surrounds the area immediately around the old building, and signs on the fence direct pedestrians to a path to the rear of the fence from the back of the parking lot. 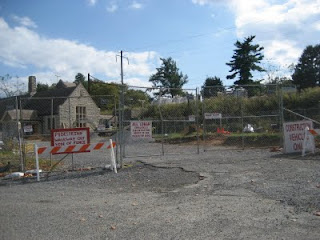 At Borough Council's workshop meeting Oct. 1, Borough Manager Pete Whipple reported that crews from Lobar Construction are working on some hazardous materials abatement inside the building -- all of which the borough knew about prior to the project. The work includes removing some old transformers and asbestos that was in caulking. 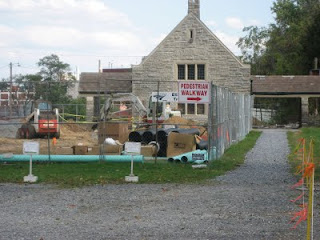 Whipple also told council that sheeting and shoring work, which is some of the most critical of the project because it will keep the train tracks in place and secure, will be done during the daytime. The work involves driving the materials into the ground with a large hammer, which creates a very loud banging. Lobar submitted a proposal to Amtrak to do the work during the day, and Amtrak approved the plan. Amtrak crews will reroute trains after Lobar meets certain advanced notification requirements.

"We are extremely appreciative that Amtrak has taken a favorable view of the submittal," Whipple said, adding that it is "phenomenally good news for the borough." That's not hyperbole, because the work could have been done at night. And with two apartment buildings and Masonic Village all within a stone's throw of the train station, such work done at night would have been disruptive to an entire section of the community.
Posted by Jeff McCloud at 3:53 PM