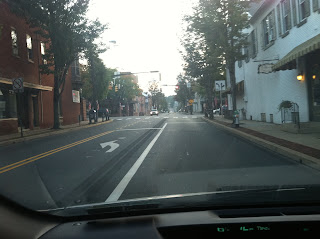 In the past several weeks, left turn lanes were installed on East and West High Street at Market Street as part of a synchronization project and other improvements to all the signaled intersections in the Elizabethtown area.

As anyone who navigated the intersection can attest, drivers had been making their own through and left turn lanes for years. This created hazardous and dangerous situations at times.

With the turn lanes, drivers now know exactly where to go. The project did require Borough Council to eliminate parking on High Street so the lanes could be painted,  but it was a decision that creates a safer community.

When I drove through the intersection with the marked turn lanes the first time, I thought that it would eventually need left-turn arrows for High Street drivers. During the Elizabethtown Area Regional Authority's meeting this morning, West Donegal Township Supervisor Chairman Ralph Horne brought up that point. 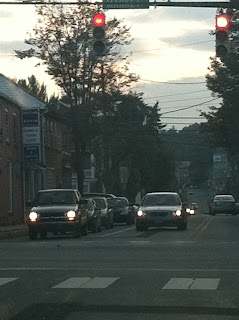 However, Steve Gault, a traffic engineer for Mount Joy Township, said the synchronization of all the traffic signals complicates adding the arrows. While they could be installed, he noted that the time it would take for the arrows to cycle through would have to be taken from the cycle on Market Street. And if you adjust the timing at that intersection, all of the other intersections through town would need adjusting to accommodate the change.

"It's sort of a balancing act," Gault said, adding that the negatives of adding the arrows outweigh the positives.

Gault also noted while the synchronization project will help with traffic flow through Elizabethtown, Maytown Avenue at Market Street will continue to be a congested intersection. He said "the only way" to eliminate that is to "build more capacity or reduce (the) volume" of traffic.
Posted by Jeff McCloud at 9:39 PM