I am thrilled that Market Street Improving Business is holding a first-ever Beans and Brews event that coincides with Second Friday next week. This is the kind of event that downtown Elizabethtown needs and that can generate tons of excitement and buzz for the community.

Here are the details (full disclosure: I wrote the following news release on behalf of Market Street Improving Business and distributed it to local media):


ELIZABETHTOWN – Home brewers and cooks will put their beers and chili to the taste test in the inaugural Beans and Brews from 6 to 8 p.m. March 8 as part of Second Friday in downtown Elizabethtown.

To be held at the Elizabethtown Public Library, the brewing portion of the evening is a sanctioned event by the Beer Judging Certification Program. Sponsors for the event are Lucky Ducks Bar and Grille and Lancaster Homebrew.

“Beer and chili go great together, and I know we have some great cooks and home brewers in the area,” said Andrew Schoenberger, one of the founding members of Market Street Improving Business, a nonprofit organization that promotes downtown business in Elizabethtown. “This is a great opportunity for amateurs to test their best recipes against their peers. More important, Beans and Brews is an even better reason for people to come visit downtown Elizabethtown.”

Admission is $10 just for the chili contest and $15 for both the chili and homebrew contest. Admission allows for sampling the chili and beer. The pass also will get discounts at local shops for one week after the event and 5 automatic entries to win either a $50 gift card to Lucky Ducks Bar and Grille or a homebrew startup kit valued at $70.

The entry fee for the beer competition is $6 before March 4 ($10 after March 4), with a limit of two entries per person. Home brewers must have one bottle for judging at the library by 4 p.m. on March 8 for it to be judged. A panel of four judges – three from BJCP and one guest judge – will taste 4-ounce samples in a blind test. Beers will be judged on American Homebrewing Association/BJCP guidelines.

The entry fee for chili is $3 by March 4 ($6 after March 4) and will have three judges. Only one entry per individual or business is permitted. The chili will be judged on the following criteria: meat texture, temperature, consistency, spice and taste, and color and aroma.

Both brewers and cooks must provide three gallons of their beer or chili to serve to those who attend the event. They will be eligible for a Taster’s Choice award, presented to the ones that receive the most raffle tickets available for purchase by contest entrants and attendees. Proceeds from the event will benefit the marketing and revitalization of downtown Elizabethtown.

Award winners will be announced at 9 p.m. Friday at Lucky Duck Bar and Grille, 45 N. Market St., a short walk from the library.

Market Street Improving Business is a nonprofit organization founded in 2011 to provide downtown Elizabethtown businesses with support, marketing strategies and plans, organizational structure and beautification funding. It supports and promotes community and economic education and sustainability.
Posted by Jeff McCloud at 8:14 PM No comments:

Walkers, cyclists and runners soon will be able to traverse Elizabethtown, from the east side to the west, on a pathway that the borough is constructing.

A pedestrian and bike path that has been part of the borough's downtown master plan approved in 2005. The plan, a map of which you can see here, is to have a path that stretches from the train station all the way to the Elizabethtown Area School District property.

We have been working on the west section from Market Street to the Train Station for a couple of years. And then last year, the borough received a federal Smart Growth Transportation (SGT) grant of $329,743 through the Lancaster County Transportation Coordinating Committee to extend the pathway network east from Market Street downtown through Community Park to the Elizabethtown Area School District.

Matching funds for that grant came from a $630,872 state grant for the section from Conoy Creek at the Community Center to the train station. Total costs for both segments of the pathway network amount to $960,615. Construction on the eastern section is expected to begin this year.

Why are we doing this project? Because it will have a long-term positive effect and impact on the borough, on the downtown, on the quality of life for residents -- the list goes on and on. Take a look at the 10 reasons why the National Trails Training Partnership says municipalities ought to consider walking and bike paths.

Have you spent any time on the Conewago Rail Trail, whose trailhead you can catch on Route 230 just outside Elizabethtown? I've ridden my bike as far as Mount Gretna, and even in the middle of the week I've encountered people walking, running, cycling and riding horses. On a sunny weekend, the parking lot on Route 230 is jammed, and vehicles line (unsafely, in my opinion) the area near where the path crosses Route 743.

I remember one of our borough staff saying a couple of years ago that so many people use the rail trail, "and there's nothing out there." Think about it: For almost 10 miles, until you get to Mount Gretna, there's beautiful scenery, but you can't stop for lunch anywhere. Imagine with our own trail that will intersect in the downtown, where people can detour to Rita's or Lucky Ducks.

And what about the health benefits? We are creating opportunities for people to exercise on a nicely designed designated path. In this country, we are having a national conversation about obesity and what we can do about it. Here in Elizabethtown, we've decided to do what we can.

I, for one, know I'll be using the path. I am a runner, and I see a great route that will take me from Bear Creek School, through the Elizabethtown Fairgrounds to East High Elementary, behind the football stadium and catch the new path. That will take me all the way through town, to the train station. I could loop home from there, or I could run through the tunnel at the train station and get a couple of more miles on the paths and roads at Masonic Village.

Will you use the path, too? For walking, running, bicycling?
Posted by Jeff McCloud at 9:53 PM 2 comments: 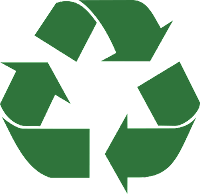 For the sake of convenience and cost savings for residents, Elizabethtown has started issuing 8-inch recycling stickers (similar to what is pictured to the left) to use for curbside recycling collection.

Instead of purchasing a green recycle bin from the Borough, residents can now get free stickers from the borough office to affix to any container to be designated for recycling. In the past, the borough purchased green recycling containers from Lancaster County Solid Waste Management Authority through a group purchasing process. Although the price has risen over the years, residents were charged just $5 to cover the costs. In 2012, the actual cost of the bin was $10.40.

By using the stickers, the borough will save money while residents will have the flexibility to use any container for recycling that suits their needs.

Of course, if you still have the green recycling containers, use them. However, new ones will not be available when the time comes to replace them. Instead, the borough will distribute the stickers free of charge. If you want to continue using a similar recycling bin, they are available for purchase at local improvement stores.

Using the stickers complies with county and state recycling requirements and is acceptable to the borough's current waste hauler.
Posted by Jeff McCloud at 12:26 PM No comments:

In January, Elizabethtown Borough Council approved an agreement with the Federal Transit Administration (FTA) to construct an overflow parking lot at the Amtrak train station (which, by the way, recently was recognized by the Pennsylvania Historic and Museum Commission as being a formerly endangered historic property that was saved and has received awards).

You might recall that an old freight train station sitting in the middle of the proposed parking lot has been the subject of intense discussions among borough officials, the Elizabethtown Historical Society (EHS), and state and federal officials for about two years. The agreement allows for the borough to demolish the freight station as long as the borough mitigates that by recognizing that a historic structure once stood there.

After coverage from January's meeting in the Lancaster press, the borough has issued the following update about the issue and the process the borough went through to reach this point:

"Last month, Elizabethtown Borough Council took the next steps toward the construction of an overflow parking lot at the Amtrak train station by approving a Memorandum of Agreement (MOA) regarding the demolition and mitigation of adverse effects for the former freight station building currently located on the property where the parking facilities are planned.

"The MOA is the result of a thorough historical review process, called Section 106, that the federal government mandates should a project using federal funds impact a historic property. This process included several consulting parties, including the Borough of Elizabethtown and the Elizabethtown Historical Society as well as state and federal agencies.

"Recent press regarding the proposed project has over simplified and failed to include several points regarding this review process. Over the past two years, numerous proposals were considered for the preservation of the former freight station building as an alternative to demolition. The Borough of Elizabethtown presented two proposals, one to relocate the building to a Borough-owned lot on West High Street and another to relocate the building to the White Oak Mills property for restoration and active use. In the end, these proposals were not considered acceptable alternatives in part because the Elizabethtown Historical Society either rejected the proposals or introduced numerous stipulations for the relocation that the Borough could not responsibly meet.

"Proposals to maintain the former freight station building in its current location were not feasible for the Borough as it would have 1) had negative impact on the proposed overflow parking facility project by limiting its scope; 2) required the Borough to use its operating and capital funds for the restoration and long term maintenance of the building; and 3) introduced liability, insurance, and building code issues as a publicly-owned building. The Borough did not believe that the $10,000 offered by the Historical Society to maintain its current location would be sufficient for such a project.

"During the review process, the state and federal governments made clear that public funding would be available for the relocation and public use of the former freight station building with the condition that a definitive, feasible and funded alternative to the demolition of the building was provided. Following a meeting of the consulting parties on October 9, 2012, the Elizabethtown Historical Society was provided an opportunity and sixty days to work in consultation with the PA Historic and Museum Commission (PHMC) to provide such an alternative. By December 31, 2012, following the expiration of two time extensions, such a plan was not produced. That is when the MOA for demolition and mitigation was drafted and then circulated to the consulting parties on January 11, 2013. Borough Council approved the MOA at their regular public meeting on January 17, 2013.

"The rehabilitated Amtrak station and intermodal transportation center recently was recognized by the Pennsylvania Historic and Museum Commission as being a formerly endangered historic property that was saved and received awards.

"This project achieves objectives of the Master Plan for Downtown Elizabethtown and the Regional Strategic Plan adopted by Elizabethtown Borough and its neighboring municipalities in 2010."
Posted by Jeff McCloud at 12:31 PM 1 comment: