Why I think extending Carey Lane is a good idea 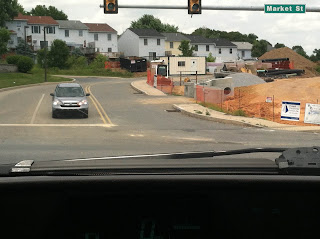 If you've driven to the south side of the Elizabethtown area -- Giant, Kmart, Weis -- you've probably seen the construction at the former Hiestand Flooring. This is at the corner of Carey Lane and South Market Street, across from McDonald's and Union Community Bank.

Members First Credit Union is building a new branch there, which will be a big improvement over how that corner has looked in recent years.

Borough Council has discussed opening this access point and whether it should be one way only for traffic coming toward Market Street or two way for motorists who want to return to South Mount Joy Street. The consensus on council seems to be the one-way option.

I think it's a good idea. For starters, the one-way-out option is a good compromise to opening it up to traffic in and out. Frankly, I never have trouble with traffic when I'm returning to town after shopping. The traffic never gets backed up -- so I don't see a need to make Carey Lane a two-way street all the way to Mount Joy Street.

Carey Lane creates a safer alternative to drive to the commercial shopping areas, such as Giant and Kmart. I don't know about you, but it always feels like I'm taking my life in hands when I turn left onto Market Street. It seems to have gotten better since the borough and the area townships teamed up to synchronize the traffic lights in the area. But I'm still in awe at the dangerous manuevers I see when people turn left Spruce Street or Groff Avenue onto Market Street. If Carey Lane is opened up -- the one-way option -- it has the potential to greatly reduce these turns, if not eliminate them.

It could help alleviate congestion on Market Street, especially at the intersection with Maytown Road. Anyone who has tried to drive south through town during afternoon "rush hour" and on a Saturday morning knows how busy it gets. Sometimes, traffic is backed up to Arch Street. If some drivers find their way to Mount Joy Street and head to Carey Lane, that's fewer vehicles on Market Street. By most accounts from people I talk to, that's a good thing.

Finally, it makes a bridge on South Mount Joy Street a moot point. For years, I've heard from people about this bridge that would connect the street and provide access to the rear of Kmart. I think I'd support its construction, but the reality is that it's too expensive. And with Carey Lane, it provides a much cheaper relief valve, which the bridge would have been, for residents in the borough who want to get out to the commercial shopping area.