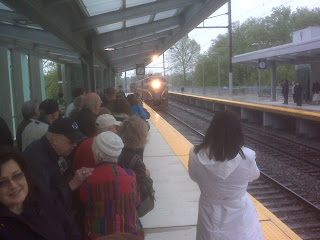 After at least 13 years of debate, discussion, design, redesign and more discussion and debate, the Elizabethtown Train Station was rededicated Wednesday, May 5.

The station received a $9.3 million facelift thanks to funding from the American Reinvestment and Recovery Act (ARRA) and planning from borough officials since the late 1990s.

Because the station had already been designed, it was considered "shovel ready" when President Barack Obama signed ARRA, commonly known as the federal stimulus. 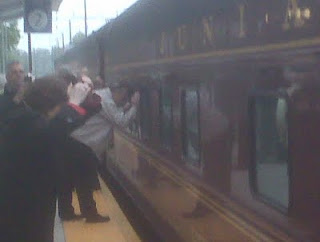 Wednesday's ribbon cutting brought borough officials, including all members of Elizabethtown Borough Council, a deputy secretary from the Pennsylvania Department of Transportation, an executive from Amtrak and the regional director for the Federal Transit Administration, along with dozens of community members. 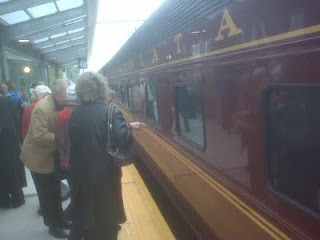 The weather on Wednesday did not cooperate for an outdoor ceremony, but the driving rain did allow for an adequate demonstration of how the awnings over the platform do protect passengers waiting for trains to arrive.


Before the event started, a renovated historic Pullman train pulled into the station, allowing those gathered to peer into the windows.

After the train pulled out, everyone moved inside the old train station, where the waiting room has been renovated to a period look. In time, train riders will be able to purchase tickets from two ticket kiosks in the station. The station will also receive  an LED message board that will show how many minutes a train is from arriving, allowing riders to wait inside in cold or inclement weather until literally the last minute before a train arrives. Elizabethtown will be the first stop along the route from Philadelphia to Harrisburg that will have the message board.


The station is truly a gem for  our community and will be a huge boost in the arm for economic development for Elizabethtown. Much credit goes to members of Borough Council from the last 15 years whose leadership helped make the station a reality. In addition, Borough Manager Roni Ryan oversaw the construction that started 1.5 years ago -- right after she was promoted to the job upon the retirement of long time Borough Manger Pete Whipple.
In many people's eyes, Whipple is the real leader of the project, who continued to make it a priority despite many challenges and setbacks. It was through his efforts working with PennDOT that the borough was able to secure the stimulus funding.
Continue to scroll down to see other photos from the ceremony.